In this post  I will discuss the transpacific steamships which carried Jue Joe and later his family from China to the United States.  Jue Joe emigrated to America in 1874 securing a position as a cabin boy onboard a steamship. He was 18 years old . At the time the Pacific Mail Steamship Company had regular bimonthly trips between San Francisco and Hong Kong with a stop in Yokohama Japan. The voyage took about five weeks.Crews were composed of a majority of Chinese men with American ship officers.   At the time Jue Joe emigrated to America he would have travelled on one of four trans oceanic wooden side paddlewheel steamships that were operating that year. The ships were the  sister ships the Great Republic , the China , and Japan  and  another similar paddlewheeler , the Alaska.  Another sister ship , the America  been lost in a maritime accident in 1872. 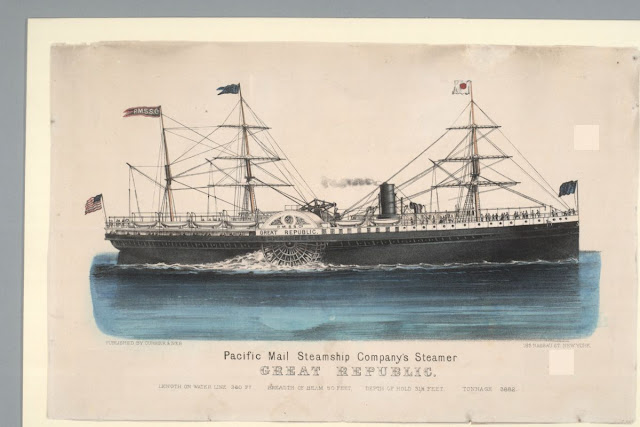 Here is some details of the Steamship "Great Republic".
"The vessel measured a massive 360 feet (109.73 meters) in length and 48 feet 6 inches (14.78 meters) in breadth. The two enormous paddle wheels spanned a full 40 feet (12.19) Great Republic’s engines had a single cylinder that was 105 inches (2.67 meters) in diameter with the piston reaching a twelvefoot (3.66 meters) stroke. Horatio Allen, the president of the Novelty Iron Works, actually held a luncheon party for twenty-two individuals within one of the cylinders as it lay on its side! Steam was fed into the cylinder via four horizontal tubular boilers which in turn were heated by four furnaces each, making a total of sixteen furnaces. Each furnace had a grate surface area of 560 square feet (170.69 meters), making the total heating surface area 15,100 square feet (4602.48 meters).106meters) in diameter.
The massive engines powered the equally enormous paddlewheels which measured 40 feet (12.19 meters) in diameter and carried thirty-four buckets.107 In addition to the powerful engine, all of the China liners carried a full complement of sails. Great Republic, as well as the rest of its sister ships, were bark-rigged, three-masted vessels. Though the ships were intended to rely upon their engines, steam engineering had not been fully refined to the point where complete trust could be placed in the engines. This was proven during a voyage when the Great Republic broke its paddle shaft and had to complete the rest of the voyage solely on sail power.

The ship was capable of carrying 250 cabin passengers and 1,500 passengers in steerage.118 Cabin passengers likened their furnishings to those of drawing rooms ashore and claimed that they were only surpassed by the finest accommodations found on Hudson River and Long Island Sound steamers. Chinese passengers remained below deck in steerage and never ventured on to the deck.

"You never see one of them on deck.”... wrote one first class passenger Hubner.
Later in his journey, Hubner ventured below decks with the captain into the steerage area. "The Chinese quarter is on the lower deck. We have about 800 on board. They are all in their berths, smoking and talking and enjoying the rare pleasure in their lives of being able to spend five weeks in complete idleness. In spite of the great number of men penned into so comparatively small a space, the ventilation is so well managed that there is is neither closeness nor bad smells. The captain inspects every hole and corner-literally everything- and everywhere we found the same extraordinary cleanliness. One small space is reserved for the opium-eaters or smokers, and we saw these victims of a fatal habit, some eagerly inhaling the poison, others already feeling its effects.

William H. Seward, an American traveler who ventured across the Pacific aboard China in 1870, recorded a similar observation."In steerage there are five hundred Chinese returning home. They pay less than half price, and are fed with the simple fare of their country.Knowing no use of beds, they sleep on the floor. In the middle of the cabin they have made, with canvas, a dark room for opium-smoking.When on deck, they appear neatly clad, and amuse themselves with unintelligible and apparently interminable games of chance "

Despite being colored by the dominant racism of the time, both of these accounts relate interesting facts concerning life in Chinese steerage. Though not luxurious, accommodation in steerage quarters was simple and apparently not unpleasant" http://anthropology.tamu.edu/papers/Roberts-MA2008.pdf 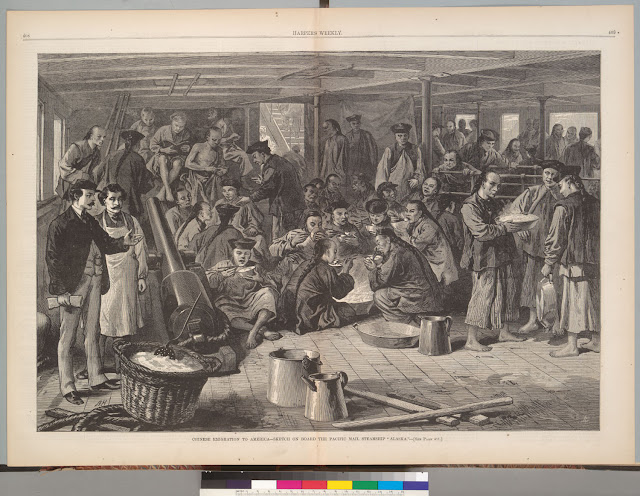 "White steerage passengers paid higher fares than the Chinese, in part to cover the cost of more expensive American food. Wealthy Chinese merchants were free to cross the Pacific in first class, but most of them traveled in steerage where familiar food was available on the long voyage."

Auntie Soo Yin: "Jue Joe worked in First-Class, but I think he slept in "Steerage" with the Chinese at night. Although the ship may have had special quarters for service workers, I recall Ah Gung saying that Jue Joe "...slept on the wooden floor of the ship with lots of other Chinese." I can imagine how awed an 18-year old like Jue Joe must have felt as he stepped aboard this huge state-of-the-art ship to work as a cabin boy. What an opportunity for a kid from rural Sum Gong Village! And landing in SF, he had acquired the necessary skills that employers in America were looking for: An ability to interact with westerners and a resume with proven skills. His mother Lee Shee gave him 16-lbs. of rice for his long and arduous transpacific journey, and when he landed, he had less than a pound of rice left. Maybe there were no dining facilities for steerage folks and you had to supply your own food. I would think, however, that Jue Joe was able to supplement his diet as he had access to the kitchen pantry as a cabin boy. I wonder how he got the job? Who in Sum Gong had such connections to recommend him?"

Here is a photo of the Steamship Alaska after it ran aground in Hong Kong during a typhoon in December 1874. It really gives a sense of the massive size of these wooden paddle steamers.  You can see two men standing on the deck at the stern of the ship. 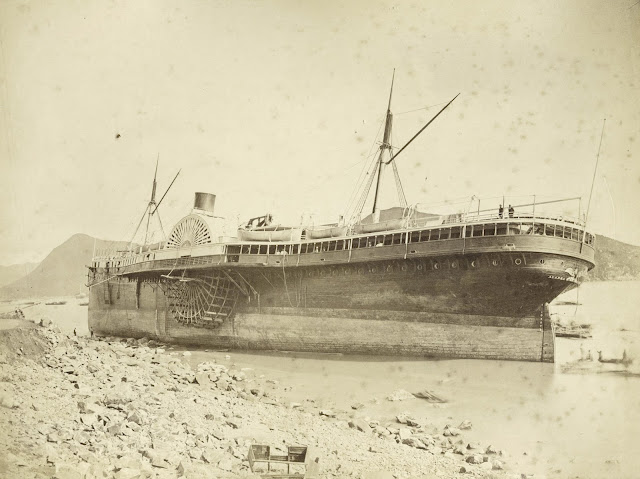 After making his fortune in America, Jue Joe returned to China in 1902 married and had two sons before returning to America in 1906 leaving his family in China.  Immigration documents reveal that he travelled back to America aboard the newly launched grand steamship  S.S. Mongolia which had had been put into service in 1904 only two years before Jue Joe booked passage.
Here is a postcard of the ship and below that a photo of the ship . 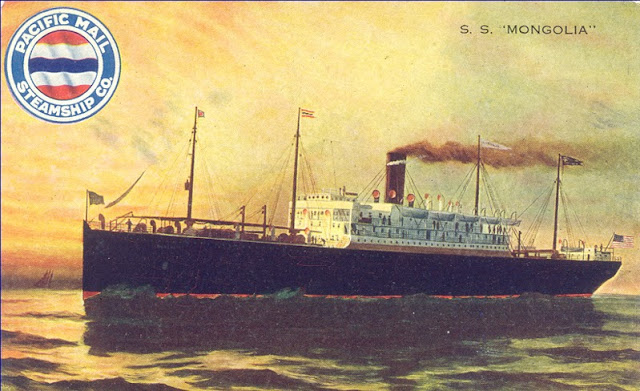 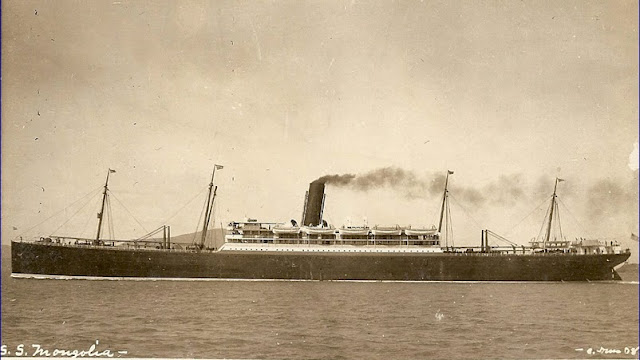 “The S.S. Mongolia, recently completed by the New York Shipbuilding Co., of Camden, N.J., for the Pacific Mail Steamship Company, made her trial trip successfully January 27, 1904. The ship is the largest yet completed in America. “The Mongolia, and her sister ship, the Manchuria, were originally contracted for by the Atlantic Transport Line, but were subsequently taken over by the Pacific Mail Company and modified slightly for their trade on the Pacific, between San Francisco and the ports in Japan and China … The speed attained at trial was 16 knots. Provision is made for 350 first-class passengers. The crew will consist of 200 people. Chinese steerage accommodations on the upper deck provide for 1,300; this space is available for cargo when not so occupied.” – Journal of the American Society of Naval Engineers, Volume 16, by L.D. Lovekin, Esq., February 1904

From the wiki: “SS Mongolia was a 13,369-ton passenger-and-cargo liner originally built for Pacific Mail Steamship Company in 1904. She later sailed as USS Mongolia (ID-1615) for the U.S. Navy during World War I, as SS President Fillmore for the Dollar Line (1921-1938), and as SS Panamanian for Cia Transatlantica Centroamericano (1940-1946).


The "Columbia" was one of three sister ships that were purchased from another shipping line by the Pacific Mail Steamship line and were repurposed to transpacific oceanic ships after serving as coastal pacific steamers serving South and Central America and the west coast of the United States. In 1918, Jue Joe finally arranged passage for his wife Leong Shee and his sons, San Tong , and San You aboard the "Columbia" from Hong Kong to San Francisco. After arriving in San Francisco the family was detained at Angel Island and interrogated before being admitted to the United States.

Auntie Soo Yin:  "Posie (Leong Shee), San Tong and his brother traveled "First Class" aboard their ship to San Francisco. Jue Joe wanted his family to enjoy the luxury of a first-class cabin, and have the best in food and service. Ah Gung(San Tong) told me about an incident he had in the privileged dining room. After ordering his first American breakfast of bacon and eggs, the Chinese waiter asked him if he wanted "toashee" with his eggs. Ah Gung didn't know what "toashee" meant. And the waiter repeated himself many times. Finally, the waiter became so frustrated that he motioned to a table that had a piece of "toast" on a plate, and he said, "You don't know 'toashee?' Beats me!" The conversation between Ah Gung and the waiter had all been in Cantonese, except for the waiter's Anglo-slang word, "toashee." Ah Gung enjoyed telling this story!"

Attached is  a copy of the ships manifest for cabin 10 on the SS Columbia during the Jue Family voyage in 1918. The cabin had four people. Since each stateroom had enough room to contain "two lower beds" , This room must have had two bunk beds. The Jue family shared their cabin with a woman named Quai Ying Lee who was as far as we know was not a family member or friend .
Click the image to inspect in more detail. Interestingly,  further research reveals that the name Quai Ying Lee was used on multiple other occasions by women immigrating to San Francisco from Hong Kong and there is no further evidence of the name in any census records thereafter leading us to assume this was a paper identity.  More on paper identities here. 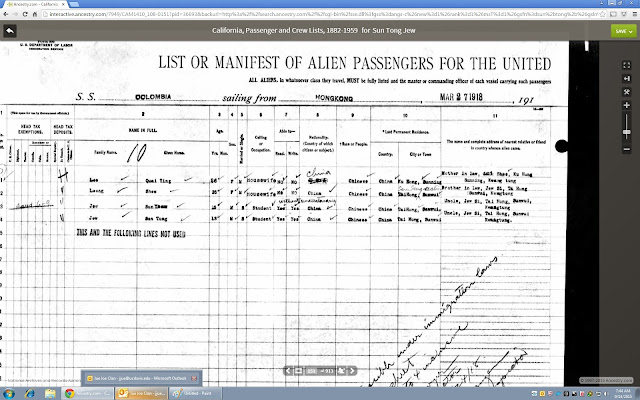 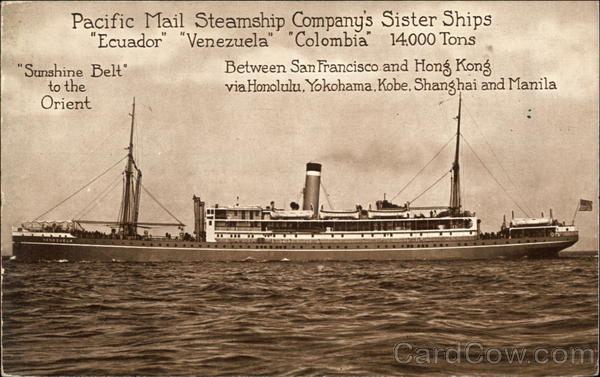